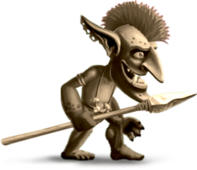 The worlds are full of fantasy creatures like zombies, skeletons, goblins, beholders, ghosts, giant spiders and others. Some of them pay little attention to the dwarfs, as long as the dwarfs do not come into their field of vision. Others gather into quite large groups and try to break into the dwarfs’ residence. The sections below try and classify them according to their hostility levels.

For the automatically generated list of all creatures, see Category: Creatures.

Ultra hostile creatures will try and reach the shelter whenever they have an open path to do so. Most of them live in the surface of the world, or appear in the world on raids, from where they commonly have an easy access to the dwarfs' place.

The hostile creatures attack dwarfs whenever they enter their "field of view", which can vary in size. Some, like the cave spirit, have a short view range, while others like the guardian, have a larger view range.

While their view isn't "directional", meaning that they're sensible towards all directions all the time (and not only to what is in front of them), their view can be obstructed by foreground blocks.

Additionally, creatures that have a base (like cave goblins) and those that have or create nests (like giant ants, giant spiders and flying octopuses) have a sensibility related to their nest or campsite, that isn't be obstructed by foreground blocks.

Most of them live in the underground, or are attached to very specific places in the nature.

These ones will only attack dwarves after been attacked by them.

Keeper of the Altar

Non-hostile creatures are unable to defend themselves. The number of non-hostile animals in the world is always limited[1]. When the number reaches a certain limit, more creatures will not spawn - therefore, if e.g. you're waiting for more sheep to spawn, try killing some snails to make it happen.