From Craft the World Wiki
Jump to: navigation, search 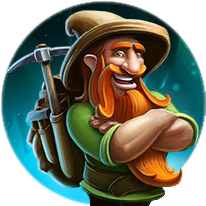 Dwarfs are the playable race in Craft the World.

Originally the game featured only male dwarfs as the playable race. The female characters, available with the Sisters in Arms DLC, are equivalent in everything: A.I., behaviour, carring capacity, tasks assignments and skill progression. They only differ in visual appearance, in voice timbre and in few attributes, like health, base armor and speed (walking, running, jumping, climbing and swimming).

For details about leveling up, see: Level (Experience).

The player begins each new world with only one dwarf. As he/she levels up, one new dwarf will spawn, always at the stockpile — one dwarf per level. The maximum number of them being 20, as this is the maximum reachable level in the game.

All spawning dwarfs are random on their:

The health of each dwarf is represented by 3 red hearts —

The health of each monster is represented by 3 green hearts —

And the health of each animal, usually non-hostile or semi-hostile, is represented by 3 yellow hearts —

When a target get damaged, the heart more on the right will shrink until it disappears. When all hearts are gone, the target dies.

Quite a few things may inflict damage on dwarfs:

When a dwarf has less then 1

, the player will be notified:

If there is one or more dwarfs with low health, this sign appears on the left side of the screen. Clicking on this icon will show one by one all wounded dwarfs.

Injuried dwarfs run for their lifes under certain circumstances.[5]

There are some ways of healing injured/exhausted dwarfs:

If there are no health potions crafted in the inventory, the mages will heal their fellows anyway, but at a very insignificant rate.

For the complete list of foods, see the main article: Food.

. All full slices represent the maximum of 10 satiety points.

As the time passes, the dwarfs become hungry and the slice more on the right will shrink until it disappears. The losing of satiety points follow this rule:

So, more tasks the dwarfs receive, more food should be served on the table.

When a dwarf has less than 1

, he/she will become hungry. The player will then be notified with the sign below.

If there is one or more dwarfs hungry, this sign appears on the left side of the screen. Clicking on this icon will show one by one all hungry dwarfs.

If a dwarf eat 3 times in a row the same food, there is no other kind of food served and he/she have less than 2

Being "X" the food eaten 3 times. This dwarf will have to eat at least 1 time another nutriment before he/she can eat that food again. So, there is no need to have a huge variety on the table. If the player can serve at least 2 kinds of food, there will be no monotony problem.

All dwarfs with more than 7 satiety points receive a health regeneration bonus of 1 health point each 5 minutes[8]. So, if food with healing properties — like apples (growing only in the forest world) — are hard to get, it's still possible to heal the dwarfs by keeping them well fed.

If a dwarf dies, all his equipment will fall on the ground and another dwarf must carry it back to the stockpile in order to be used again. If he/she dies and his/her body fall into the lava or in the ocean at the map extremeties, all the equipment will be lost.

When a dwarf dies, this sign appears on the left side of the screen. Clicking on this icon will show where his/her body lays down, along with the dropped equipment.

In a Normal mode game, when a dwarf dies, a replacement will spawn at the stockpile in:

If a dwarf respawns it will lose all skill progress and will only have 1 skill at level 10, following the spawning randomness.

To avoid this loss, the player may use a soul keeper, available from tier 7 of the tech tree, with the basic alchemy.

In a Permanent Death mode game, if a dwarf dies, it's lost forever, there will be no replacement. In this mode, each dead dwarf is 1 less to the population cap. So, if the player has lost 3 dwarfs, e.g., and get to the maximum level (20), he/she will have only 17 dwarfs available.

Dwarfs can be controlled allowing you to manually move him, place and mine blocks etc. This is done by selecting a dwarf and clicking the direct control button.

When controlling a dwarf you can:

For the complete list of skills, skill items and skill books, see the main article: Skill.

Each dwarf starts with one random skill at level 10, which can be improved by doing their related activities and using skill books up to 100 points. Skill items will accelerate this process and overcome the 100 limit. Each dwarf can develop a maximum of 3 different skills. 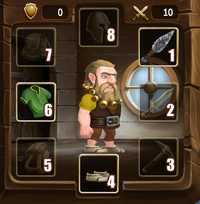 Dwarfs need you to create their armor, boots and helmets, along with better weapons, tools and accessories.

Dwarfs may be equiped with:

Look for the reference numbers on the image.

The accessories may be a backpack, a tough backpack, a parachute, a quick ladder pack and/or any skill item.

There are though items that may be used spontaneously by the dwarfs, without the player having to open the "Equip Menu": the bucket, the fishing rod, the diving helmet, the Elixir of Fire and the Elixir of Ice Arrow

All dwarfs have a natural carrying capacity that can be improved with equipment.

Beware though that the more they carry with them, the slower their movement becomes.