Guardians[1] is a very dangerous[2] hostile creature found deep underground in hidden rooms and inside the pyramids of the Desert World. When in the hidden rooms, he is often accompanied by a beholder. 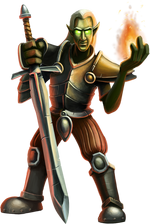 * 5 targests in a 2 blocks radius area, including dwarfs and defense towers
** cannot be reduced by armors

He will choose what to do according to each situation:

A guardian has a certain vulnerability to melee weapons and a huge weakness to mithril weapons.

In the campaign guardians will drop a scroll with the recipe to craft one of the five Exit Portal parts when killed. Depending on the world size more than five guardians will appear. In this case, one or more of them will drop no portal parts recipe.

In survival games, guardians may spawn from monsters portals underground, which often happens to be inside the dwarfs shelter and not rare, quite early in the game. Dwarfs may avoid facing him, as the gardian will die by himself after some days. When he dies - by the hands of dwarfs or not - he will drop an absurdly huge amount of runes.