Keeper of the Altar

Not to be confused with the Forest World inhabitant goblin leader, which is called goblin_shaman in the game files.

Keeper of the Altar[1] or the goblins' Great Shaman[2], is the most powerful[3] creature in the game, at least among the mortal ones. He lives in the Underground World.

As the player scrolls the game screen towards the Altar Shaman, he starts several sort of dialogues, one after another, which will gradually explain for new players how the Altar works. 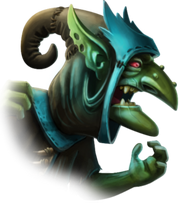 I am the goblins' Great Shaman!

How dare you come to these lands?!

You have defiled the orcs' cemeteries and disturbed the ancient altar!

The ancient deity will return to this world.

But you still have a small chance of survival.

The altar is used for offering valuable gifts.

If the deity doesn't like your gifts, he will become very angry. And all living things are mortal!

But when he is pleased, the deity will bring blessing into our world, fertilizing the soil and creating life.

The more valuable gifts you donate, the more pleased the deity will be.

You should think about it!

I will get your attention when the deity comes.

And don't you dare try killing me! I am very old and very powerful, that's right!

Even though he's very strong, with an absurd HP[4] and overpowered skills, this old priest is actually beatable.[5] On this subject, one of the game developers, after had been criticized of having created a "not fun" enemy, he just replied:

As many other creatures, the Keeper of the Altar has a quota of constant life regeneration.[6] While for other creatures this attribute may go unnoticed, it will make a huge diference while trying to kill the Shaman. His 999 HP will explain why.

He can teleport.[7] Trying to isolate him from the altar or trying to get him stuck inside some blocks, won't give the player any advantage, as he always move around when being attacked. And if he feels somehow blocked, he'll destroy some blocks around him, melting them and transforming them into water.[8]

He can not be drowned.[9] Even if he doesn't use his teleport hability, and the player succeed to completely cover the Shaman with water, it will make no difference, as he does not lose health when submerged.

When with very low health, the Keeper of the Altar becomes invisible and the only way of finding it is by the tiny green heart over his head, indicating the amount of health he still has. Something like this:

The player may also try to click everywhere around the altar to see if the attack order is activated. The crossed swords icon will indicate the shaman's position.

The Keeper of the Altar is a semi-hostile creature, meaning he will only attack dwarfs after been attacked by them. When this happens, he may perform one of the following actions:

Five balls of fire, each one with a damage of 1.0 in a radius of 2 blocks; crashing blocks and damaging dwarfs, tesla and arrow towers, and animals.[10]

The fireballs damage is not reduced by the armors that dwarfs are equipped with. The location of the fireballs are random and the shaman has not a established delay between the spells casted. This means he can cast two or three times the fireballs in no time, making a well armored dwarf with half of life die instantly.

He may evoke around him a group of goblins or a group of orcs, and sometimes a group mixed with both.